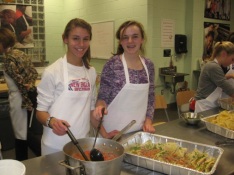 Between 1847 and 1851, one million Irish citizens died from malnutrition, disease, and exposure, when a fungus infected the country’s potato crop.

Upon hearing of this famine, some of Boston’s citizens held a meeting at Faneuil Hall to decide how they could help.

Because of its large Irish population, Boston was eager to lead the campaign to send money, provisions, and other forms of support to Ireland and began petitioning congress for permission to do so.

Volunteers donated supplies to send overseas, and by the summer of 1847, Americans had provided Ireland with half a million dollars and thousands of tons of supplies.

Grateful for the effort, any Irishmen who had been driven out of Ireland by the famine became part of the Boston community upon immigration to America.

If you would like to help the hungry, you can:

We want to know:

Have you ever volunteered to feed the hungry?