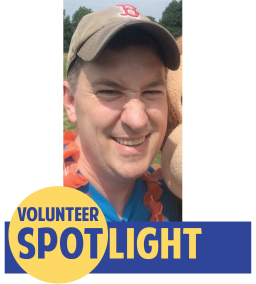 As a lifetime volunteer, when Andy Murray first heard about Boston Cares he was attracted to the format of the Calendar Program; specifically, the ability to engage in “short term volunteering.” He had been volunteering as a swim instructor but was required to volunteer three times a week. As much as he enjoyed the opportunity, he found it difficult to balance with his day to day schedule.

Although the Corps Program is considered one of Boston Cares’ more commitment- based programs, Andy says it still offers manageable flexibility. “I like the more committed volunteer[ing] but at the same time, the flexibility.” A standout for his service in the Basic Tech Corps, Andy finds tech opportunities particularly interesting. “When I heard about the opportunity to do things that were a little more directed and that I’d be going to the same place a couple times, that appealed to me. And I think maybe just as much was the fact that there was maybe going to be a tech one [Corps] because that’s also something I’m very interested in- I tinker all the time, it’s part of what I do professionally, I’m sort of the family IT guy answering computer questions that are pretty common.”

Andy’s interest in helping others while engaging in tech based projects spurred his involvement with the Corps through Tech Goes Home, a nonprofit organization working to provide under-served residents the tools, education, and access to technology. Basic Technology Corps volunteers are a part of a network of volunteers who share a passion for enhancing others’ tech skills. Volunteers select a partner organization focused on addressing 21st-century skills development that affects Boston’s communities. Corps volunteers deepen their community engagement by committing to serve through the Corps and attending skill building opportunities. Volunteers are expected to serve with 3 classes annually, which averages out to about twice per month.

Andy explains that he finds opportunities where volunteers commit to a specific site especially fulfilling because volunteers are able to develop meaningful relationships with clients and staff members at the organization. He says that the chance to strengthen bonds with the individuals served makes the structure of the Corps truly unique. “As you continue to go and spend more time with the participants, you build up that familiarity and are better able to make a connection.”

This connection helps volunteers in their service because they can gain ‘students’ trust, which leads to more meaningful interactions. Andy says that coming to a site regularly earns students’ confidence in his ability to assist their learning.

“They [students] may not come up to you directly and ask questions unless you make sure they’re comfortable. I think especially if its technology with older people there’s a bit of a fear or embarrassment of not knowing it. I think one of the things you have to do is ask ‘is this working well,’ ‘can you show me what you’re doing?’

By volunteering regularly, Andy feels that volunteers become part of “the group.” Establishing a level of trust eliminates clients’ fear of embarrassment while volunteers can demonstrate that they are effective tutors.

“And I think once you make the connection, it’s a stronger connection than if you were somehow in some group where people were open from the beginning…often I find I sign up again for the project even though we only have to go twice a month.”

A closer interaction allows volunteers to know which difficult learning topics should be revisited, provide curricular support for staff and even help design supplementary training info for topics such as “basic cell phone use.”
As a result, volunteers are able to see the improvement with participants. “We’ve had groups where the first couple of classes were teaching how to hold a mouse- how the click works- and then the last class is basically them doing a PowerPoint presentation on the country they’re from or their favorite recipe. No group is the same and some classes may have different learning needs. The knowledge gained by such classes may also be applied differently as well.” As Andy fondly recalls, he once volunteered with a “small business centered course” for individuals who ran daycare centers out of their homes. “In the class it was cool because they were doing a schedule for their program- something to show parents”

Andy also served as a Corps Captain where he mainly assisted in administrative capacities such as providing sign in sheets, verifying hours and sending reminder emails. Corps Captains are critical to the Corps program for communicating with volunteers and coordinating logistics. In addition, they help make sure that volunteers have a satisfactory experience.

For Andy, one of the most rewarding aspects of his volunteer service is seeing the students’ improvement including “how they [clients] have used the technology.” He comments that you may see the same people in a different class, which helps show that volunteers are getting a lot out of the program.

Finally, when sharing some of his favorite volunteer memories, Andy recounts a class where parents and children would learn together.

“The class in general was amazing…to see the kids interacting with parents because it just made me think that when I was in high school, I don’t know if I’d be interested in coming back to school at night with my mother to sit at a computer and it was wonderful to watch the exchange of knowledge.”

Andy notes that many of the students seemed more comfortable using a computer than their parents but that parents were still engaged by the classroom format. The exchange of information between parent and child made the volunteer opportunity unique.

“Typically, the kids were more computer savvy, but one group- a girl and her father- really stuck out because they did their project on jazz musicians. So, it was obvious that was something they were interested in but my impression was also she was learning a lot more about the subject from her father and he was probably learning more from her about the computer. So, the knowledge transfer was pretty cool.”

To learn more about the Boston Cares Corps program or to join the Basic Technology Corps visit www.bostoncares.org/jointhecorps