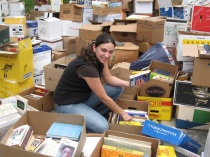 Once upon a time, a Boston man found a million-dollar value in education, and it made all the difference:

John Deferrari was a self-made millionaire investor who made his first investment in knowledge when the Boston Public Library was established in 1848.

Growing up in a poor Italian-immigrant family in the North End, John dropped out of school at the age of 13 to begin work as a fruit peddler.

Story has it that he was inspired by the suit-clad businessmen he saw walking the downtown streets and directed this inspiration towards becoming the best fruit peddler in Boston (which may be an exaggeration, but we’ll let it slide for the sake of narrative effect).

When Deferrari moved to Boylston Street, fate set up his fruit stand next to the building that would soon be the Boston Public Library—the first public library in the United States, and the first establishment to introduce the concept of borrowing books.

Discovering all of the resources the library provided on finance management, Deferrari focused the same resolve that got him ahead as a fruit peddler on devouring everything he could on how to smartly invest the earnings from his produce stand.

These investments helped him become the best kind of millionaire: successful, but humble.

Three years before his death, Deferrari made a final investment: he donated one million dollars to the BPL as a gesture of gratitude, realizing that the education he received by the books in the library helped make his achievements possible.

If you would like to invest your time in someone’s education, you can:

What have you gained from education? Who was your favorite teacher in school?