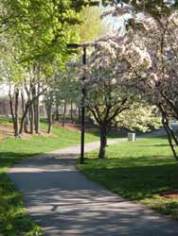 ave you ever heard of the Southwest Corridor Park? Are you aware of the history behind it? If not, you really should be; It’s a fascinating story:

In the 1950’s and 60’s, the state developed plans to place a 12-lane highway smack dab through the middle of the city. The preparations for this resulted in bulldozed homes and misplaced families.

Although this was devastating to all communities involved, the cool part is what happened in response:

The affected communities banded together to protest the highway and convinced the government to instead re-position the Orange line. What was originally an elevated train (and a bit of an eyesore) moved underground, opening up the landscape of the city. A few years later, the open land over the new train tracks that resulted from the demolition damage became a park.

But we haven’t even gotten to the really cool part yet.

While volunteering here with Boston Cares, or individually, it’s not uncommon to receive thanks from passersby, strolling through the park with their dogs and children. Some even stop to help out.

This story shows the power of communities and the importance of building them. In standing together as a community, everyone can now benefit from of parks in the city landscape, and as a community of volunteers, we can ensure that they stay nice for everyone to enjoy.

If you want to get involved with environmental projects you can check out these opportunities:

Do you know any stories about Boston’s history that really exemplify the power of community?

Happy Birthday to Boston Cares! Today we are celebrating 29 wonderful years of working with our amazing volunteers and community partners to build a greater Boston. Here’s a look back at some of our earliest moments!
Wishing all our volunteers and partners a #happyvalentinesday❤️ !