On Wednesday, May 22, thirty Boston Cares volunteers helped plant 33,000 flags on Boston Common, one flag for every Massachusetts fallen soldier since the Civil War.

Penny Joy Snider-Light, a Boston Cares member, shares her story about planting flags for her father:

This is the second year I am participating in this beautiful, poignant Memorial Day effort to commemorate Massachusetts military lives lost in various wars. I come with the intention to honor the memory of my beloved father, Henry S. Gaffin. My father enlisted in the Navy as a very young man, serving in the Pacific post Pearl Harbor for three years – aboard the US Navy destroyer, the USS Colahan.

He was ultimately awarded many medals and certificates for his service, including the Purple Heart.

My father lived well beyond his Navy service years, having died in 2010. Although he did not die during combat, I feel moved to come and be a part of this event because I know if he were alive – he would want to be here, as well – planting flags in memory of his military service family – who died during the various wars.

When I am here, planting American flags in honor of Memorial Day in this gorgeous setting – I feel very close to him; I know he is here with me. And I’d like to think he is proud that I am participating in this effort. I do this for myself – in his honor, but I also do this because he cannot – so I do it for him, as well.

Like so many of those of his generation, the war and his service were perhaps the defining experience of this lifetime for my father. I want to emphasize that my father was not a “warrior personality.” He certainly was not what you would call a professional military man. He was at the core of his being a very gentle, sweet and endearing man. But he was the supreme patriot and extremely proud of his service as well as passionate about the country which he served.

Sadly, my father bore the after effects of the war all of his adult life. He suffered from PTSD and because for his generation – Post Traumatic Stress Disorder was not given the respect and recognition as an authentic illness that’s available to those serving in the military today – he never really had an opportunity to process the experience and move into healing.

With each flag I plant – I invoke his name, and send him my love – wishing him healing and peace. 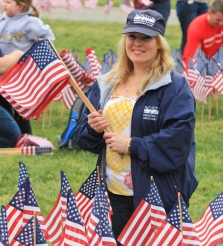